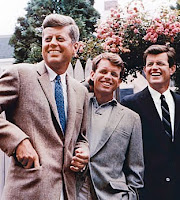 Somewhere laughter erupted, as if someone had just told a joke.

It was raucus, frat house laughter, exploding loudly and then fading into Boston-accented commentaries on whatever the hell was so funny.

It was familiar laughter. Ted opened his eyes to see where it was coming from. The mist in the room began to lift and Ted saw three shadowy figures. Two were over six feet tall and one was shorter, and their foreheads nearly touched as they leaned toward each other. One of them -- Ted wasn't sure which -- was about to tell another joke.

The three straightened and turned to face him.

"Hey, yourself," said Jack, flashing his teeth. Joe and Bobby smiled, too.

Ted blinked his eyes and stared at the three grinners.

"Kennedy Dead at 77," said Bobby, reading from a paper that suddenly materialized.

"A 'malignant glioma' for God's sake," said Jack. "Christ, you always did do things the hard way."

"A .22 round to the head in Los Angeles," Bobby shrugged.

"Couldn't have been easier, old man," Joe said. "But a 'malignant glioma'? Jesus."

Ted looked around. "Is this heaven? Where's Dad?"

The three older brothers exchanged glances. Jack glanced down at an invisible podium, like it was a press conference and he was searching for a misleading answer.

"This isn't heaven," Bobby said. "More like the narthex."

"Remember, we all predeceased him," added Jack. "But if he came through here, we didn't see him."

"Mother is up ahead of us,"clarified Bobby. "And Eunice and Jackie and John Jr. -- all of them."

Ted stared at his brothers, and they stared back at him.

Bobby snorted impatiently, the way he did when he was reading convoluted Justice Department memos.

A mirror appeared in front of Ted. He did look good. The gut was gone, the jawline was firm, the hair was dark brown.

"It's a fringe benefit," said Joe, stepping along side Ted to share the mirror. Joe examined his teeth and smoothed his hair with his palm.

Ted turned away from the mirror and extended his hands toward his brothers.

Jack placed his hands in the side pockets of his sports jacket. "We are here," he said, "to honor you."

"Welcome me to the other side?"

"More than that," said Bobby.

"We're here to pay our respects," Jack said. "Dad had big ideas for all us boys, and you transcended us all."

"Yes, you. Joe was relieved of the burden early, but I was president and Bobby became a civil rights icon. But you went so much further."

"So we're here as your honor guard," said Joe. "You were the greatest among us."

"Damn," he said. "I could have used this respect when you were pummeling me in touch football."

"You hadn't earned it then," said Bobby, frowning.

Bobby began to sum it up in lawyerly fashion.

"Because of you, this country stands on the verge of universal health care," he said. "You were responsible for more legislation that became law than any of us: in civil rights, voting rights, education, labor justice, immigration reform. You pushed George W. Bush to implement 'No Child Left Behind.'"

Jack added, "You pushed this country to oppose apartheid in South Africa. You pushed for peace in Northern Ireland. You forced the U.S. to stop sending arms to the Pinochet dictatorship in Chile. You opposed this country's entry into the Iraq War."

Jack looked down at his feet. "I wish you had pushed me a little harder to get out of Vietnam," he said in a low whisper.

"But you were the man," Joe said. "You are the Kennedy future generations will remember."

"If they mention us at all," Bobby said quietly, "we'll be referred to as Teddy's brothers."

The four were silent for a moment. Teddy cleared his throat.

The three older brothers stepped aside and pointed the way to a shaft of light.

"Any last minute instructions before we go?" asked Joe.

Ted scratched his head and smoothed his dark brown hair.

"Yes," he said, stepping forward. "The work goes on, the cause endures, the hope still lives and the dreams shall never die."
Posted by Philip E. Jenks at 10:27 AM No comments:

I hope Fess Parker never finds out, but no one in my household really cares that he and I are friends on Facebook. 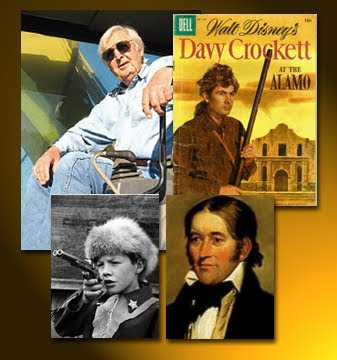 My spouse, who was born in Havana the same year the three-part series Davy Crockett, King of the Wild Frontier premiered on ABC, glanced up at me tolerantly when I told her the news, and silently returned to the book she was reading.

I'm fairly certain none of our six adult children have seen the Disney classic, which in 1954 demonstrated the power of television to galvanize a generation of tiny boomers. Perhaps my four younger siblings, who grew up with me in the 1950s on Cedar Street in Morrisville, N.Y., will be impressed, but they may connect Fess Parker with later Disney films, such as The Great Locomotive Chase, Old Yeller or Westward Ho! the Wagons.


For me, Fess will always invoke the image of Davy Crockett. And when I impulsively searched his name on Facebook last week and discovered a Fess Parker page, I was intrigued. Immediately I sent him a friend request, and a few days later I was ecstatic to receive the message: "Fess Parker confirmed you as a friend on Facebook."


Of course, I know the Facebook network is virtual, not real, and not everyone who has a Facebook page reads it every day. Probably President Obama has better things to do, and I know a few national church leaders who never see their page. They have interns who do all the work, confirming friend requests, commenting on friends' posts and taking quizzes to find out what Peanuts character they are. The interns make them look good, usually.


Maybe Fess reads his page and answers posts by himself, and maybe he has someone else do it. (Suspiciously, his email goes to some person named Kris.) And at 84 (the age he turns August 16, the day before Davy Crockett's 223rd birthday August 17), the big guy probably has more on his mind than corresponding with fans, including running his winery and new resort hotel in Los Olivos, Calif. (http://www.fessparker.com/)


But if any of Fess' 100 Facebook friends are worried he might not be reading their posts, they don't show it. Without exception, the messages they write on his wall are warm, admiring and respectful. As I re-read my post, it borders on sycophantic.


I was in a particularly receptive period of my formative years when the Davy Crockett boom began in 1954, and Fess' Davy was a superb model. He was honest, patriotic, hard working, family-oriented, and a champion of the oppressed. Davy never lied, exactly, but he taught a lesson I remembered all my life, which is, never let the truth get in the way of a great story.


No doubt PETA (founded nearly three decades after the Davy Crockett boom) would have frowned at Davy's buckskin clothing and moccasins, but even today I see a raccoon as a hat on the hoof. But that aside, there was no greater influence on my growing love of God's good earth than Fess' Davy. The rich foliage that Davy and Georgie Russell (the late Buddy Ebsen) rode through looked lush enough on our 12-inch black-and-white Admiral. I was lucky to grow up near a small but dense forest and I would spend hours wandering through the woods, pretending to track b'ar, listening to bird calls and pretending I was Davy. On a couple occasions I carried my father's crowbar into the woods to see what it would have been like to carry Davy's 10-pound "Old Betsy" rifle on a hunt. I was eight and found the crowbar too heavy to carry. And I learned a few years later that I had no stomach for shooting animals, so a camera is now my weapon of choice.


But when my age was still in single digits, Fess Parker and Davy Crockett were excellent teachers. They were the source of some of my greatest joys and one of my greatest childhood disappointments.


The three-part Davy Crockett series was so successful that Disney spliced it into a single movie for release in 1955. I quickly became fixated with the thought of seeing Davy and Georgie on the big screen, in living color. Major-release pictures did not stay long in the tiny Morris Theater on Main Street, and by the time films got to Morrisville they had been scratched by so many other projectors that it was like watching scenes through a steady rain. But none of that mattered to me. I placed seeing Davy Crockett, King of the Wild Frontier at the top of my list of things to do before I was 10.


The day the movie came to Morrisville, I woke up throwing up. My father, who had already agreed to escort a group of kids to see the movie, had the hapless task of telling me I couldn't go with them. I cried with heartbroken desperation, assuring Dad between projectile vomits that I would be fine if only I was allowed to go.


Fortunately for people who went to the theater that night, Dad held firm. In the 54 years that followed, I have only seen the movie on the big screen once: in Rome in Italian, in 1967 when I was in the Air Force. The line I remember from that viewing is, "Buon Giorno, Chief."


But it doesn't matter. I have had many disappointments since I was 9, and many joys, so it's time to forget. Besides, I have a DVD of the movie, and can watch it in high def anytime I need to.


And this week it got even better. Fifty-four years after I was too sick to see my favorite movie, Fess Parker is my friend.
Posted by Philip E. Jenks at 9:43 AM 2 comments: