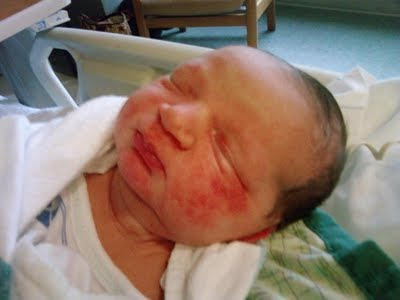 Here you are in a pose that will make you cringe when we show it to you later.

So just suspend the evidence of your own eyes and believe me when I say you're beautiful.

Back in the day (and that goes back a ways) it was unusual to see a camera aimed at you as you slid precariously out of the womb into your father's nervous hands. When your mother's generation was born, parents took more time.

They'd clean up the kid, put a ribbon in her hair, and soften the lights to frame a nice picture with a dusty Kodak camera. A day or so later they'd remove the Kodachrome from the camera and place it in a opaque metallic envelope and mail it off to the nearest lab. After a few more days the lab would receive the envelope, remove the roll and place it in a wire basket, aiming to process it on a first-come-first-serve basis. Hours or days later the film would be opened in a darkroom and carefully immersed in a chemical solution to preserve the images. The film would then be hung on a hook to dry overnight. A few hours later the images on the roll would be burned onto photosensitive paper -- soon to be cut to 4 inches by 4 inches in size -- and the new photographs would be carefully placed in an envelope and mailed back to the proud parents. Two speedy delivery days later, the parents would open the pictures and carefully examine them, setting the good ones aside and hiding the overexposed ones in a sock drawer.

That night, they'd take paper and pen and write a nice note to the grandparents, "Here she is, she looks just like you, Dad," and place the note and pictures in an envelope. The envelope would lay on the kitchen table for a few days while the parents went through the many adjustments of welcoming a new person into the house. One day, either Mom or Dad would rediscover it and exclaim, "Honey, I thought you mailed this weeks ago!" Honey, dripping with chagrin, would look through the desk drawer in vain for stamps. "I'll have to take it to the Post Office," Honey would explain. A few days later that task would be remembered, too, and the envelope would soon be on its way to Nana and Grandpa. It would eventually be received with exultant jubilation by the expectant grandparents.

By that time the kid would be weaned. Maybe in kindergarten.

So you see, Charlie, getting an instant picture of you on our cell phones is a bit of a shock and a reminder of how much times have changed. Your 15 minutes of fame began before you could take your first breath.

But I don't suspect you'll be overly impressed by this sudden immersion in media. By the time you're old enough to cringe at this picture, the electronic miracle will look pretty primitive to you.

But instant coast-to-coast transmission of a granddaughter's image is pretty amazing to Nana and me. And we've seen some communications miracles in our day. I've listened to Jack Benny and Fibber Magee and Molly on the radio (yes, God help me, and live, too) and was an early admirer of black and white television. I watched John Cameron Swayze report Ike's election in November 1952, was kept quiet by Buffalo Bob and Howdy Doody while my mother cooked rare chicken and cold asparagus, thrilled at the adventures of Captain Video, and was unable to detect the special effects that enabled Superman to fly. JFK was also brought to life in our livingroom by a 12-inch black and white Admiral, but I felt I knew him as well as any of our neighbors. I felt the same closeness to Jack Paar and Kate Smith.

I didn't see color television until I got home from the Air Force, but I was stunned by its quality. The first full-color show I watched was Walter Cronkite's reporting at the Democratic Convention riots in Chicago in 1968. I have rarely spent an evening away from color television since.

But, Charlie, all those miracles seem primitive now. Nana and I now fall asleep to high definition television that displays details so fine you can see Larry King's facelift scars and the botox injection holes in Diane Sawyer's forehead. High-def DVDs of George Reeves' Superman reveal what the 12-inch admiral hid, including his frayed red S and hand-sewn repairs on his uniform. And baseball and football games are so vivid it feels like you're in the stadium. In fact, the view is better.

But hold on to your pampers, Charlie. Before you pluck your first gray hair, all this will be gone, too. In the not too distant future, perhaps before you're in college, you'll experience 360-degree vision and sound. You'll believe you're standing in the middle of a football field as the game rumbles all around you. You'll see the players so vividly you can count their pores and you'll hear the grunting on the field, the roar of the crowd, the sounds of overhead aircraft. If you wish, you'll be able to smell it: the sweat, the blood, the divots of freshly torn turf. And when the action gets too intense for you, a switch on your belt will take you high over the stadium so you can study the tactical action on the field. Or if you prefer a more traditional game experience, switch to the stands and watch the referees throw down their flags.

Of course, you could have the same experience in musical theater, opera, or the Globe theater. It's up to you. And when your own babies are born, you won't have to do anything as crude as snapping their pictures on your phone and emailing the images to their grandparents. The babies' virtual images will be transported so convincingly -- sound, sight and smell -- that your grandparents will think they are holding them in their laps. Or almost.

In your lifetime, Charlie my dear, media will change your world beyond our current ability to comprehend it. It will be harder and harder to know what is real and what is electronically transmitted illusion. Or delusion.

A lot of it will be great. Imagine the educational possibilities, the opportunities to see foreign lands, magnificent art and beautiful concerts without leaving your livingroom. Imagine the people you can meet!

But a lot of it will be terrifying. I find myself thinking of presidential election years with the twelve Democratic and thirteen Republican candidates virtually projected into your bedroom for one-on-one debates. But presumably the future will have an off-switch somewhere.

One of the challenges you'll face, Charlie, will be the dilemma of determining what is real and what is not. And when to throw the switch.

What is real? At this point, of course, Momma and Daddy and brother Philip and a wide array of loving aunts, uncles and grandparents, all are real. Hold on to them, Charlie, and they'll hold on to you.

What is real? Unfortunately, that sphere also includes a lot of ugliness and unpleasantness. Grumpy parents and boredom, sure, but also disappointment, failure, frustration and, eventually, aging, physical decline and disease.

Sometimes, Charlie, it's going to be tempting to turn away from that reality and lose yourself in a virtual 360-degree football game.

And when you do, have fun.

But don't forget to come back. The ones who love you are always out here where it's real.

And no matter how complicated life gets, or how pleasing the media escape routes that are being contrived for us, it's out here where we belong.
Posted by Philip E. Jenks at 3:13 PM 1 comment: