When Jesus Says He Doesn't Know Us 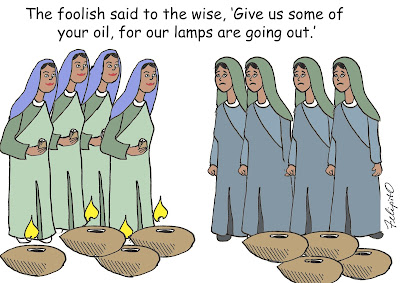 Jesus said: “Then the kingdom of heaven will be like this. Ten bridesmaids took their lamps and went to meet the bridegroom. Five of them were foolish, and five were wise. When the foolish took their lamps, they took no oil with them;  but the wise took flasks of oil with their lamps. As the bridegroom was delayed, all of them became drowsy and slept.  But at midnight there was a shout, ‘Look! Here is the bridegroom! Come out to meet him.’ Then all those bridesmaids got up and trimmed their lamps.  The foolish said to the wise, ‘Give us some of your oil, for our lamps are going out.’ But the wise replied, ‘No! there will not be enough for you and for us; you had better go to the dealers and buy some for yourselves.’ And while they went to buy it, the bridegroom came, and those who were ready went with him into the wedding banquet; and the door was shut.  Later the other bridesmaids came also, saying, ‘Lord, lord, open to us.’  But he replied, ‘Truly I tell you, I do not know you.’  Keep awake therefore, for you know neither the day nor the hour.” Matthew 25:1-13


Assuming that the unbending bridegroom in this little parable represents Jesus, are you just a little bit bothered by his refusal to admit the dawdling bridesmaids into the feast?

Is this a dark warning from on high that if we stray from the path of righteousness – if we are not unfailingly faithful – God may find us lacking and slam the door of heaven in our faces?

Well, that seems pretty unfair. According to the story, the only mistake the foolish bridesmaids made was to assume the bridegroom would show up on time. Was it their fault that he dilly-dallied so long they ran out of oil for their ceremonial lamps?

Isn’t Jesus being a little harsh?

For those of us who are not sufficiently saintly, the story is more than a little disturbing. If all have sinned and fall short of the glory of God – if we are indeed, as Luther put it, all simultaneously sinners and saints – how can ever be sure if our spiritual lamps are always trimmed with enough oil?

Moreover, if Jesus is warning us he will slam the door in our faces if we fall short, where is the gentle Jesus meek and mild we all love? Where is the Father’s paternal protection for the foolish bridesmaids?

G. K. Chesterton, the British writer, critic, journalist, and theologian, was not surprised that Jesus sometimes appears to have hard edges.


We have all heard people say a hundred times over, for they seem never to tire of saying it, that the Jesus of the New Testament is indeed a most merciful and humane lover of humanity, but that the Church has hidden this human character in repellent dogmas and stiffened it with ecclesiastical terrors till it has taken on an inhuman character. This is, I venture to repeat, very nearly the reverse of the truth. The truth is that it is the image of Christ in the churches that is almost entirely mild and merciful. It is the image of Christ in the gospels that is a good many other things as well.

Our daughter Katie, who is on the Autism spectrum, has a simple faith and an uncomplicated theology. When it snows, she imagines her best friend Joseph, who died years ago, standing happily in heaven and asking Jesus to make it snow or rain or shine as a sign that Joseph and Jesus love her and love all of us.

Katie’s view may not be meteorologically sound but the more I think about it, the less trouble I have with her theology. She sees Jesus as a constant cascade of God’s love on all of us.

She also senses that we don’t always understand what Jesus is saying to us. She listened carefully when her mother preached about Jesus’ rudeness in Matthew when he ignored a non-Jewish woman who approached him pleading for her daughter. When the Syrophoenician woman persisted by shouting at his disciples, Jesus stood his ground, saying, “I was sent only to the lost sheep of the house of Israel.” That wasn’t the Jesus Katie knows. “He made a bad choice,” she told her mother. And indeed the woman’s persistence seems to lead Jesus to the same conclusion, and – finally – he heals her daughter.

As we read through the Gospels, it seems clear that Matthew’s theology is harsher that that of his fellow evangelists. He uses the phrase “gnashing of teeth” five times to describe the fate of sinners thrown into the eternal darkness. Scholars who believe Matthew is the same person as the tax collector who became Jesus’ disciple point out that Matthew had a powerfully intense view of himself as a sinner. He knew something of the outer darkness and wanted to be sure his fellow sinners knew the need for repentance.

We are reading Matthew’s Gospel this month as we follow the Narrative Lectionary, which is being read in thousands of churches today.

But in other churches that follow the Revised Common Lectionary, a kinder, gentler parable of Jesus is being read – the story of the Prodigal Son in Luke 15:11-32.

Most of us can tell this story in our own words: the younger son who went to his father and asked for his inheritance … the wild and riotous sinning of this younger son as he spent his fortune and ended up sleeping with pigs … the younger son’s humiliating repentance as he resolved to go back to his father and beg work as a hired hand … his father’s delighted acceptance of his son’s return, killing the fatted calf and welcoming him back to the fold … the elder brother’s extreme annoyance at his younger brother’s good fortune …

Across the millennia, millions of sermons have been preached about the Prodigal. But on this particular Sunday, when we are meditating about the fate of the five foolish bridesmaids, the contrast in stories could not be more vivid:

The only sin of the five foolish bridesmaids was to run out of oil and be late to the wedding feast, so the bridegroom – a rhetorical stand-in for God or Jesus – bars the door.

The sins of the prodigal son were too numerous and too terrible to mention beyond the phrase “dissolute living,” and if they made a movie about him you’d have to be 17 to see it without an adult. Yet when he came back to his father – a rhetorical stand-in for God or Jesus – he was welcomed with joy, celebration, and forgiveness.

Why are Matthew and Luke so far apart in their stories of sin and forgiveness?

I can only provide the same answer as Tevye when asked why the Jews of his village in Fiddler on the Roof follow their traditions: I don’t know.

We can go so far as to observe that Jesus used literary metaphors to attract our attention, and sometimes he used humor and exaggeration, and occasionally it’s difficult to know exactly what he wanted us to think about his anecdotes. Certainly he expected us to laugh at the notion of a camel getting through the eye of a needle, and he assured us that impossible things – like the rich gaining entry into heaven – are indeed possible for God.

The story of the ill-fated foolish bridesmaids certainly gets our attention and focuses our thoughts on our own spiritual preparedness. But is Jesus saying they are locked out of the feast forever? That would be putting conditions on God’s love for us, and the good news of the Gospel is that God’s love for us is unconditional. And God sent God’s son into the world to die for our sins and keep us in the eternal fold.

C.S. Lewis, the great Christian “apologist” whose radio voice was second only to Churchill’s as a beacon of faith and hope during Britain’s Finest Hour, warned us not to get entangled in seeming contradictions in the Bible. He said Jesus is the foundation of our faith, and his love for us is unconditional. It is that love that undergirds is, and Lewis cautioned against focusing on specific Bible verses that we may not fully understand.

But the most assuring words come from Martin Luther himself, who preached on this passage in Matthew in Erfurt at St. Michaeliskirche in October 1522.

“You heard how the ten virgins with their vessels or lamps went out to meet the bridegroom,” Luther preached. “Five of them were wise, but the others were foolish.  Two types of Christians are depicted for us in this parable, namely, true Christians and phony Christians who only give the appearance of being Christians.”

By “phony Christians,” of course, Luther means the Pope and his ilk.

“If God is for us (as I am certain God is), who will do us harm?” Luther assures us. “Faith is stronger than every foe.  No one can extinguish our lamps.

“Therefore, let each one see to it that he has these two together: the oil, which is true faith and trust in Christ; and the lamps, the vessel, which is the outward service toward your neighbor.

Thus Dr. Luther helps us interpret the mysterious metaphor of the oil. The oil in the lamps of the wise bridesmaids is the faith that is a gift from God to each of us, and it will never disappear.

And it is God’s gift of faith that assures us the door of heaven will never be slammed in our faces.

“Fear not, little flock, for it is your Father’s good pleasure to give you the kingdom,” Jesus tells his followers in Luke 12:22.

And in John 14:2, there is this promise: “In my Father’s house there are many dwelling places. If it were not so, would I have told you that I go prepare a place for you?”

And these are the promises that put this prayer in all our hearts: