When You Wash Your Face, Remember Your Baptism 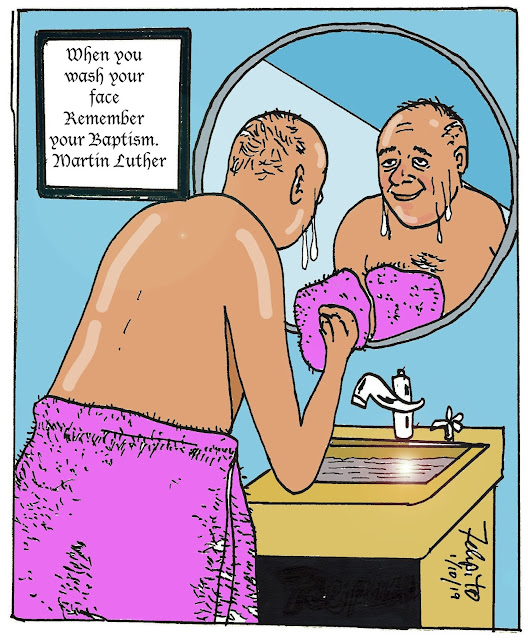 And when Jesus had been baptized, just as he came up from the water, suddenly the heavens were opened to him and he saw the Spirit of God descending like a dove and alighting on him. And a voice from heaven said, “This is my Son, the Beloved, with whom I am well pleased.”

Martin Luther believed all people were born contaminated by original sin, and baptism was a sacrament of spiritual cleansing. He didn’t want us to forget it.

“When you wash your face,” he said, “Remember your baptism.”

I must wonder what this tells us about the hygiene habits of medieval Europeans. Was the spiritual act of face washing a daily or weekly or monthly habit?

But apart from that, one must ask:

Do I remember my baptism – really?

A couple years ago, when one of our Lutheran Diakonia teachers asked who remembered their baptism, I was the only person to raise my hand.

This I remember: On 6 November 1966, while fighting the Cold War at an Air Force base in England, I was persuaded by the relentless testimony of Southern Baptist friends that my baptism as an infant didn’t take because back then I was too young to “know the Lord.”

I was 20 then and I was almost as sinless as I was in 1946 (if you don’t count bad intentions and unclean thoughts) but I succumbed to the pressure to get dunked “BAB-tist” style. That means being immersed in four feet of water in specially constructed baptismal pool.

Air Force chapels don’t have baptismal pools so the congregation gathered in a civilian Baptist Church in Woodbridge, Suffolk. November can be cold in England and the water in the pool was no warmer than icy Martlesham Creek that flowed nearby. A small paraffin heater was ignited and tilted precariously toward the water but I could see it wasn’t warming anything. I watched uneasily as ice crystals formed along the edges of the water. The chaplain was protected from the iciness by rubber hip boots but I was dressed in a flimsy white gown.  When I went under, the witnesses to my baptism diverted their heads and winced. I was never in danger of downing. The freezing water paralyzed my diaphragm. And when Lutherans ask if I remember my baptism, my answer is: yes!

It’s not that I think my second baptism was unnecessary, like a redundant vaccination, or that it was in any way offensive to the Holy Spirit.  I just think I could have made the same testimony without it.

Thirty years after my re-baptism, in 1996, I was a member of the staff of the World Council of Churches, and attended a dialogue in Costa Rica between Orthodox and Pentecostal Christians. There were several Pentecostal pastors from Nicaragua and one of the Orthodox bishops asked them whether they re-baptize their Roman Catholic converts.  Somewhat to everyone’s surprise, one of the pastors replied, “No, not if a priest baptized them when they were babies because the Holy Spirit was there.” Lutherans and indeed Catholics actually take that a step further, declaring that in emergencies anyone can baptize, and Luther said it doesn’t matter how much water is present because the Holy Spirit is present.

The Pentecostal pastors said they had reached that conclusion through a prayerful reading of Baptism, Eucharist, and Ministry, the World Council of Churches’ celebrated Lima document published in 1982 and republished scores of times afterwards. This document was developed under the leadership of Lutheran pastor William Lazereth, director of Faith and Order for the World Council, who was bishop of the ELCA’s Metropolitan New York Synod, bishop in 1988.

Among the document’s comments about baptism are these:


The Holy Spirit is at work in the lives of people before, in and after their baptism. It is the same Spirit who revealed Jesus as the Son (Mark 1:10-11) and who empowered and united the disciples at Pentecost (Acts 2). God bestows upon all baptized persons the anointing and the promise of the Holy Spirit, marks them with a seal and implants in their hearts the first installment of their inheritance as sons and daughters of God. The Holy Spirit nurtures the life of faith in their hearts until the final deliverance when they will enter into its full possession, to the praise of the glory of God (II Cor. 1:21-22; Eph. 1:13-14).

I had decided to get re-baptized in 1966 in order to make a public testimony of faith that I couldn’t have made in 1946. I did it in the spirit of the Southern Baptist message that was codified years later in The Baptist Faith and Message, adopted by the Southern Baptist Convention on June 14, 2000:


For the majority of Baptists, Christian baptism is the immersion of a believer in water in the name of the Father, the Son, and the Holy Spirit. It is an act of obedience symbolizing the believer’s faith in a crucified, buried, and risen Savior, the believer's death to sin, the burial of the old life, and the resurrection to walk in newness of life in Christ Jesus. It is a testimony to the believer’s faith in the final resurrection of the dead.

Looking back on my first baptism in the fall of 1946, through which I may have slept or wailed but certainly do not recall, I am persuaded that same testimony of faith was made. I could well have chosen to restate that testimony in 1966 and could and should reiterate it in 2019. But additional baptisms are not necessary to do it.

When Jesus came to John to be baptized, God made visible what has been invisible in the billions of baptisms that have taken place since: Heaven opens and the Holy Spirit descends.

We may not see it with our eyes as the witnesses did when Jesus was baptized.

But Jesus’ baptism is an eternal reminder that whenever any one is baptized in the name of the Father, the Son, and the Holy Spirit, the miracle is sufficient for all time.

As to what Jesus’ baptism looked like, whether he was dunked like a Baptist or sprinkled like a Luther, no ones knows. And as a recovering Baptist, I no longer believe the form or the timing of baptism is important.

Most people in the Christian world, including more than a billion Catholics, experience baptism as tiny infants. They squirm and often scream in a priest’s arms as water is poured gently on their heads. When the sacrament is finished, they fall sleep, as innocent as they were before they were sprinkled. This pre-cognitive experience is also common to millions of infants born to Lutheran, Orthodox, Anglican, and other main line Protestant families.

Billions of us slept or wept through our baptisms, perfectly sinless. The seasoned sinners involved in the rite were the clergy, parents, and Godparents who winked at the irony of accepting Jesus and renouncing Satan on behalf of a blameless baby. It’s hard not to think of the closing scene of The Godfather, when Michael Corleone recites words of faith for his tiny nephew while his orders to whack his many enemies are executed out of sight of the baptismal party. Obviously it is the witnessing adults who have an urgent need to renounce Satan, not the innocent babe.

It’s hard to understand how the church evolved to the point of baptizing the innocent when the rite was originally intended for the guilty. John the Baptist made this clear by calling baptismal candidates a “brood of vipers,” (Luke 3:7), and by offering the rite as an opportunity for sinners to repent.

That original intention for baptism must be one of the reasons John was so unnerved when Jesus, whom he believed to be sinless, came to him and asked to be baptized. In Matthew, John demurs, saying, “I need to be baptized by you, and do you come to me?” Jesus answered, “Let it be so now, for it is proper for us in this way to fulfill all righteousness.” (Matthew 3:14-15)

Unlike every other adult who seeks baptism, Jesus came to the rite without sin. But like every adult, Jesus used the ceremony to announce a change in lifestyle. He was leaving behind his life as a Nazareth carpenter and beginning a new messianic mission. What better place to announce his new life than in a watering hole filled with sinners eager to turn away from sin? And what better audience to watch slack jawed as heaven opens, a dove descends, and God’s voice speaks: “You are my Son, the Beloved; with you I am well pleased.” (Luke 3:21-22). It’s the Bible’s brass age way of shouting, “Look, up in the sky, it’s a bird, it’s Heaven, it’s God!”

Most everyone agrees that John baptized only adults seeking redemption and there is no biblical evidence that infants were ever baptized. Many scholars also believe that John baptized by immersion – a good Baptist term that means full body dunking – in part because the Jordan River was deep enough to do it.

Others surmise John asked people to stand waist-deep in the water as he sprinkled their heads. That’s the form many artists imagine when they depict Jesus’ baptism. To stand with dignity in water is certainly more esthetically attractive than the image of a drenched person splashing and gasping for air as dripping strands of hair clog their nostrils. (Baptists know all about that.)

But, truth be told, the Bible is silent about the specific form of John’s baptism leaves us wondering if it involved full or partial immersion. John may even have sprinkled heads as converts stood comfortably on the dry bank. But I doubt it.

Baptists and their Anabaptist relatives are not the only groups that practice full body dunking. Submersion (of infants) is practiced by Orthodox and in the Ambrosian rite of western Catholics.

But whatever form it takes, Martin Luther wrote that the miracle of Jesus’ baptism is “sufficient for all time” because when the heavens opened above him. And the heavens have never closed.


The genius of Luther’s preaching is that he led his hearers into the text and let the story itself create more than enough drama and excitement. He did this with a kind of exegetical imagination that remained faithful to the historical and literary details of a text by opening the heart of scripture to the hearer. In this case, he noticed that the heavens opened when Jesus was baptized. He then brought that fact crashing into the listeners’ present by insisting that those same heavens were not shut again. They were still open!

And as a result of Jesus’ initiation of his mission by entering into baptism, Luther said the heavens will never close again, and we can experience that opening through hearing the preached word of God, through prayer, through our interaction with scripture, through the Eucharist, through our agape love for one another, and – where it all begins – through our baptism, wherever and whenever and however it happened.

Martin Luther wrote in the Small Catechism, “let us not value and treat this unspeakable gift half-heartedly. For baptism us our only comfort and doorway to all of God’s possessions and to the communion of all saints.”

When Jesus stood in the water and was baptized by John, the heavens opened for him and for all who believe, and when we experience the same “unspeakable gift,” we are united with Jesus and all our sisters and brothers for all time.

So the next time you wash your face, remember your baptism. And remember that if you look closely at your bathroom ceiling with your spiritual eye, you may see the heavens open, gloriously, intimately, and forever.