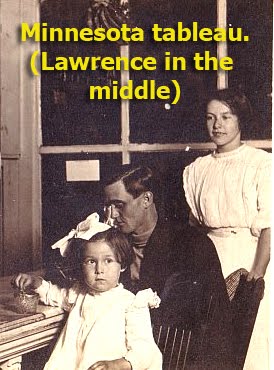 If you're not already a follower, a blog you need to add to your must-read list is Antojitos y Alabanzas. I often have the unique privilege of glimpsing these ruminations before they go live and I am invariably fascinated by the thoughts they express and the celebrations or complaints they bring to God's attention. This month's offering, "Set Loose," records Martha's rising inclination to tell the stories about her life and family that suggest the holiness of human existence. It looks like an introduction to an epic series of personal and family stories, so keep your eye on Antojitos y Alabanzas.


Duely inspired by my dearest friend, I am sitting here in St. Louis Park, Minn., on a chilly Sunday morning, sipping hotel coffee and ruminating about the family stories that would shake out of my own tree.


I'm in Minnesota to attend the annual General Assembly of the National Council of Churches and Church World Service, but visits to Minnesota always set my mind on a family mystery I've never solved. It involves my maternal grandfather, Lawrence Weed Emerson, who was born in Minnesota in the late 19th century and grew to young manhood some where near here. When the First World War intruded he joined the Navy, saw Par-ree, and returned home with strange notions about keeping down on the farm.


For reasons I have never discovered, and in defiance of Horace Greeley's westardly advice, Lawrence resolved to leave Minnesota and move East to the Catskill Mountains to start a hardscrabble dairy farm.


For most of my life it never occurred to me to wonder why. My mother and her brother were born on that Catskill farm and it always seemed to me our family roots went deep into that stony mountain soil. Grandpa's Minnesota origins were rarely mentioned and I may not even have been aware of them until I researched his obituary in 1980.


Today, Grandpa's inexplicable move east is a gnawing mystery to me and I would love to hear the story that explains it. But everyone who would have any insight is long gone.

And even if those who knew were still talking, they might not choose to reveal anything. Years ago, long after my grandparents and mother had died, I happened to be in Sacramento, Calif., where Lawrence's sister, my Aunt Winifred, had retired. Still living in her own home, Winifred was in her ninth decade, physically frail but mentally acute. We had a good visit, and when it came time to leave, I popped the question.


"Auntie," I said. "Do you know why Grandpa left Minnesota and moved to New York State?"


She looked at me like it was the most useless inquiry she had heard in years."


Winifred leaned forward in her rocking chair so she could whisper in my ear.


"He always wanted to," she said. With that, she sat back and smiled, which was the Emerson way of signaling the conversation was over.

I never saw Aunt Winifred again, and if she hasn't joined the cloud of Emersons on the other side, she'd be over 100, still smiling through her secrets.


Perhaps the answer to the riddle was in her smile, and perhaps the answer is that I come from a long line of folks who preferred to live unexamined lives and were motivated by urges as amorphous as, "always wanted to."


But in the early 20th century, a move from Minnesota to the Catskills didn't make a lot of sense. God knows the weather doesn't improve as you move in that direction, and neither does the farmland. The rich, rolling plains of the midwest must have offered better crop yields than the stony Catskills, and it can't have been easy tilling corn rows or leading cows up and down those steep, rock-pocked hills -- or making money in a growing season that turned to ice in five months.


As I sit here in Minnesota, perhaps just miles from where Grandpa grew up, I yearn to know more. Did Lawrence return home to Minnesota from the war and fall madly in love with a cream-complexioned milk maid whose honor he preserved by running away? Did he knock off a few banks in St. Cloud and escape to where the cops would be least likely to look for him? Did he interpret a cryptic message in the Farmer's Almanac that there were oil deposits in Delaware County, New York? Or -- and this always seemed unlikely to me -- had he just wanted to go?


If any of my sibs or long-lost cousins have any insights into this mystery, I would be glad to hear from them. Does anyone know the true story of Lawrence's eastern emigration?


What I do know of his life in New York State suggests it was not the Promised Land. He married Agnes Close, a local girl whose parents already had a farm in Andes, and their first son, James, died shortly after he was born. My mother was born several months later, followed by her brother, Maurice. Life on the farm was difficult, but my mother reported mostly happy memories until the Great Depression began sapping the life out of farmers.

When I was growing up I often heard Mother and Grandpa Lawrence tell how difficult it was to make money selling their milk to the local creamery, and how it got worse when underpaid creamery workers refused to process the milk and poured thousands of gallons down the hill into the mud.

Shortly after that, Grandpa lost the farm and Mother said that was the only time she ever saw him put his head in his hands and cry. Later he became a postal deliverer with a rural route that took him through winding mountainous roads that were often covered with snow and ice. After Grandpa retired, Maurice's wife, my beautiful Aunt Delores, died of ovarian cancer at 26 and Uncle Maurice was the single parent of three young children. Maurice died of cancer a year later and Grandpa adopted the kids. That's another story, but life for Lawrence in New York State was never easy.


Maybe it wouldn't have been any easier in Minnesota, but Grandpa Lawrence wasn't one of those who thought life should be easy anyway.


Even so, I wish I had throught to ask him about his move when he was still around. I'd like to think he would have explained it logically, although for most of the time I knew him, he didn't really think I was smart enough for logical discourse. Probably he would have given me the monosyllabic Emerson answer reserved for unanswerable questions: "Wulll."


But the mystery does inspire me to follow the advice set down so eloquently in Antiojitos y Alabanzas and tell the stories I know, before people who are not yet interested in them think to ask questions.


In the meantime, I'll leave it to relatives and friends to examine the rare photographic record Grandpa left to tell me if there are any clues I missed. (See www.ncccusa.org/lawrence).


Perhaps the answer to the mystery is indeed no more complex than "he always wanted to."


Or perhaps the answer lies in the intriguing complexity of the eloquent but enigmatic "Wulll."